So what's a Scottish Saltire doing on a Norfolk village sign? 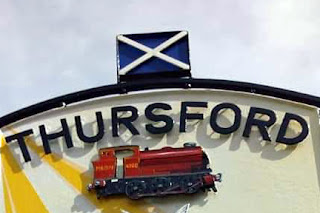 Sometimes art projects take us on journeys we are not expecting. They lead us along the threads of history and we learn a great deal in the process. Not just in the practice of the art itself.

Commissioned as the artist to repaint and renovate Thursford village's unique sign, there was a question to puzzle over. A mystery to solve.

Why was there a Saltire on the top of a tiny wee village in Norfolk, England. Whilst pitching the new designs to the Parish, and Parish Council, enlightenment and further mystery were just around the corner.

So far, so logical.


But to have a Scottish flag atop the village sign of a southern English village?

Why not the St George's Cross?

Mysteries abound in material legacies like village signs. The years pass on. Memories dwindle into gossamer. They blow away on the winds, only to settle in unlikely places.

There are such threads in Thursford. The family Ross - there for generations now. Indeed, the clan name of Dalzell drifted in from Motherwell, Glasgow. Wandering in for different reasons. Staying for different times. Scottish farmers in the previous two centuries. And then an Irish Royal Air Force worker in the last.

Thursford is the name of a small village in North Norfolk, England.

There are other names, all with significance.

The Scott-Chadds. These are people who took ownership of the somewhat grand Thursford Hall in yesteryear. They are shown now with the shield and falcon crest in the centre of each side. A proud beginning to this sign's legacy, though not the beginning to the village's. That was here before then.

Miss Eliza Goddard - school mistress. Listed when the school was founded in 1862. Placed here, and perhaps helping to redress the absence of many women's names in Norfolk history. How many children's feet patted up the road, heads full of learning. Their journeying and their playing in those misty days, aided by the efforts of this one woman.


Charlie Plumbly - farmer, whose Norfolk was and continues to be the bread basket of England. A family fully connected to the land, even today. Forming and maintaining such deep foundations.


These shades of the past, connected to the living of the present. And in one very real way, in the guise of Cricket and Vamus.


These are the horses at Thursford Castle. Of today. They are cared for by Sally and Mark Hickling, who kindly allowed them to pose for research material. Such animals have been as important a part of this village in previous centuries as the women and men of the place. Returned to their traditional duties. Back before a cart, and a plough.

Again, using their sustainable energy, even if just in this picture.

Then closer to now. George Cushing, Minnie Cushing, Harry Bushell. Progressing the connections from horse to machine with a love of steam. Thursford's traction engine and historical legacy abounds to this day. You can almost hear the clatter; feel the vibration.

There is a warmth to this village. A sense of deep and long history. A sleepiness too; in the quiet passing of the years, the drifting of the dreams.

Who will come next, as next they will surely come. From Scotland? Perhaps. To admire the top of this single sign? This touchstone. This symbol. There will always be a little touch of the Celt here.

The roots go deeply. The threads are long.
Posted by David Dalzell at 20:44