Shoving the Elephant Overboard - The Outback Half

So I'm returning to Australia after spending the spring and summer months back in the UK, reconnecting with family and friends; working, and building further artwork for re-stocking my UK outlets.


The time spent away in the northern hemisphere, gave me time to reflect on that first big southern adventure.

So many things happened there, it is difficult to wrap that all up into one blog entry, so as promised, and shoving the elephant back overboard, I will not try, and I'll just touch on a single story, that resonated with me, instead.

Making the decision to come back to Australia was easy. But what was it specifically that I was looking forward to?

The fashionable head gear, and all the friendly insects?


The hugely crowded beaches, where you can hardly move for windbreaks?

The modern forms of transport?

The outside barbecue facilities on the road?

Or perhaps it was Dave's facial expression when I told him I was coming back?

Seriously, I think it has something to do with the eternally positive outlook of Australians, and how they so often can turn difficult and challenging situations into something inspiring, and endurable.


One story sums this up perfectly.


Whilst we were travelling post wet season, in March 2018, between Brisbane and Darwin, we stopped in the town of Barcaldine, Queensland.

An unassuming town, Bacarldine represents the origin of unionism, and the beginnings of the modern labour movement.

The meetings of sheep workers and pastoralists here were key to the growth of this early political force and they met to resist unfair treatment and strike to improve workers' rights in what must have been hugely difficult situations, let alone a demanding physical climate.

They met under The Tree of Knowledge, outside the station entrance of the terminus of the Great Western Railway.

The tree became a focal point, and symbol of this unity and strength. In 1888 the Central Queensland Labourers' Union was formed at Barcaldine.

In 2006, the tree was intentionally poisoned by glyphosate.

I suppose in some situations, with such a malicious act against a living organism, and symbol of human values, the story might have ended there. At best, it may have resulted in a plaque, and some lines of history for passing tourists to be wistful about.

What emerged, like a seed awaiting the inevitable bush-fire, was an artwork that captured the indomitable spirit of the original movement's sense of injustice.


The memorial, designed and built by m3architecture and Brian Hooper Architect, can now be seen on the original site, and to sit beneath it is quite humbling.

The constructed wooden 'canopy' now towers above you, and when the wind blows, the wooden chimes sound eerily above the original tree's preserved trunk.

The story itself becomes even more memorable, when you find out that the original species was a Ghost Gum tree.

I spent a bit of time sitting and reflecting and listening to the tree's voice. For me there was the reflection of the wooden chimes symbolising the tree's leaves, and the many voices of the workers, struggling to be heard.

Later I found out that scientists have in fact been able to successfully clone material from the original tree, and specimens can be found growing in various places in Queensland. It gave me a smile and a lot to think about on the road ahead.

Personally, I find stories like this truly inspirational, and full of hope. That the seed of human resilience is there, and grows on. No matter what.

I'm now looking forward to seeing what's on the next horizon... 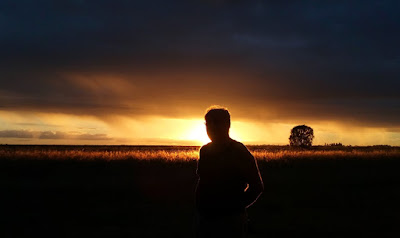 Posted by David Dalzell - The Wandering Artist at 12:40 2 comments: