A Dave in the hand is worth two in the Bush...

So it was time to explore the new - down under. This was the exciting possibility before me.

I'd arrived in Australia, and was awaiting the myriad differences and similarities I'd be confronted with.


I was beginning to realise that a good amount of time would be needed to recover from the 44 hour journey I was experiencing (note to self, budgeting on the trip might have a cost somewhere else).

I had a long stop over in Melbourne though, and so had the chance to soak up some of the atmosphere, grab a bite, and sketch in my journal.


Sitting by the river Yarra, having my lunch, I was to overhear a wee snippet of the city, and an old connection to Queen Victoria, in the guise of Lord Melbourne. A school teacher had taken all the school girls in his care to the river and was asking them what they knew about the city's name.

I was glad that I would not be relied on to answer, as my history of the Victorians in the old and new country is severely lacking. However, Governor of New South Wales, Richard Bourke apparently named the city after the Prime Minister of Great Britain, Lord Melbourne, William Lamb, a man close to Queen Victoria. As the years go by, I'm beginning to realise that a number of men could claim to be close to the Queen.

There was a vibrant air to Melbourne, and I loved being able to travel on the free trams within the city centre area. This really increased my chances of viewing more of the city.

After Melbourne, it was a then a final internal flight up to Darwin, and the Northern Territory (NT).

Hugely different climate in Australia's only tropical city, I was met by a beautiful, sunny, warm and occasionally stormy city as the NT moved into its wet season.

I was incredibly grateful to be in the very capable hands of Dave, who had lived in the NT for over 25 years, and his scientific and tour guide background would prove invaluable. It is always better to be in the company of someone who has lived in the area, really experienced a place, and so knows its history. So I was happy to be led whilst we began the task of trying to track down some native wildlife, albeit that I was feeling incredibly out of my depth suddenly.

I had spent the last few months building to this point. All had been to get me here and experience this. And here I was. Now was the time to appreciate it, work with it, perform and produce and have a great time...to boot.

There was a moment of panic...of feeling doubt...of not knowing what to do.

A bit of advice from Dave would help me greatly. The true meaning of NT...

'Not Today', 'Not Tomorrow', 'Not Tuesday', 'Not Thursday'...dont expect too much...and then you can be pleasantly surprised...

And bird watching proved at first to not be such an easy task...wildlife not always being well behaved, nor predictable. Couple this to the challenge of identification, our work would be cut out for us, and expectations were low.

Trying anything new of course comes with a bit of trial and error, and we found ourselves going all David "Attenborough" and David "Bellamy" as we herded some Australian Ibis in the undergrowth! 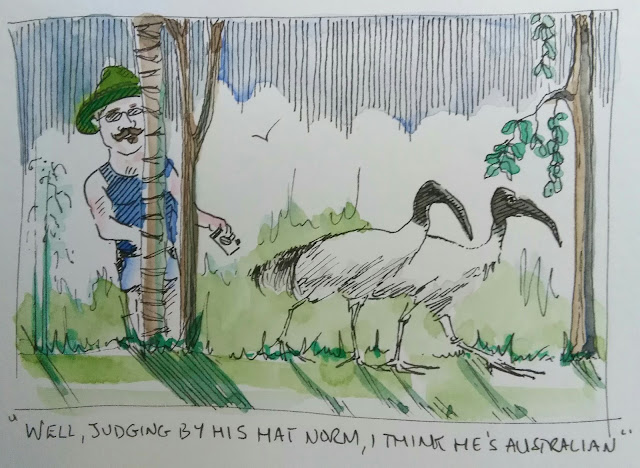 The Ibis though is quite common in Australia, and is debated as either a nuisance, or endangered. Perhaps it is both, as we as humans judge animals as they attempt to adapt and survive in a world more and more dominated by humans. In any respect, these birds did us at least the courtesy of getting close enough to take a photo, and so work up an image.

I was hopeful that this would only be the beginning of the sights we would see, as I learned more about the birds and animals on this massive continent.

There is a stately, and elegant nature to birds. They carry themselves with dignity which is beautiful to watch. In the wetlands of Fogg Damn, the Brolga, or Dancing Crane could be seen in evidence around the giant water lillies.

And I did have a burning wish to see another familiar, yet different variety of a familiar wee bird. The Fairy Wren. Only time would tell....and I'd try to remember...keep my expectations low...

Posted by David Dalzell - The Wandering Artist at 10:22 No comments:

So seven months have passed now since I returned from New Zealand, where my life changed significantly and projected me forward to build my business, find temporary work, and to plan my next Antipodean adventure, whilst following my heart to Australia, and Darwin in the Northern Territory.

The last seven months had been challenging, fraught, productive and also hugely satisfying and rewarding.

The double need to plan, and to act spontaneously was continuously present. That feeling of constantly living on the edge of a cliff, knowing that now is the time to leap. To leap, and leap again. Just as the house martin does each trip from the nest, the risk of the fall transforms into the supportive movement of the feathered wing. Hopefully growing stronger with each journey.

Plunging and hitting the ground, although avoided, does not mean you don't deal with turbulence and obstacle. But then the thrill is often at the edge.

This summer the business definitely took a big step forward. Two of the flights took me to two new galleries and shops. Bass Rock Gallery in Dunbar and 17Reasons in Moffat.


Both of these creative ventures are run with a resonant joy that is both uplifting and inspirational. These people just radiate a wonderful energy that helps me on this journey. Craft and arty people themselves, they have been successful at growing their passions into successful businesses, and I am very grateful for that.

If art could be created whilst constantly in the presence of these people I'd be a happy chap...alas the work often calls for solitude and focus...but there are ways to bring people around you whilst producing.

A second summer trip saw me return to Scotland, and Edinburgh, to demonstrate one of my latest techniques in crafting.

It is a great experience to chat to people and show others how my particular style reveals itself and the crafted items are made, where the ideas come from, and also potentially encourage others in their creative endeavours. 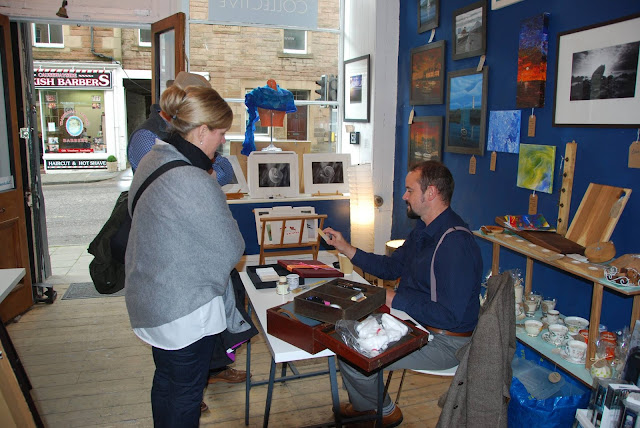 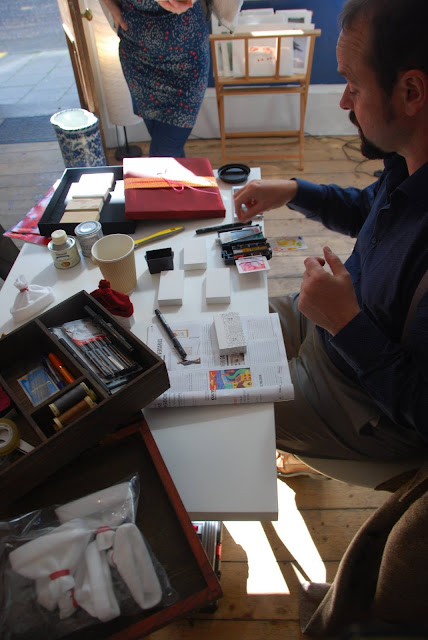 The great thing about demonstration is that it helps me reinforce my own learning as I describe the process and also learn from people too with their feedback. I aim to carry out workshops in the Art & Craft Collective in June 2018, so watch this space and stay tuned to either Facebook, or Twitter, or this blog.

It also became a time to begin making new contacts in my home county of Norfolk and selling art and craft at Fakenham Makers Market with the kind help of my sister-in-law Christine Good, who has begun to show me the new world of jewellery making...go team!

This had become a time of juggling...work, art and craft making, seeing friends and family and planning and organising my 6 month trip to Australasia. So much to organise I realised and an enormous amount of discipline, planning and decision making needed. There would be many moments of feeling frayed at the edges.

Now the countdown is on...back to wandering, but this time with a very strong pull, and goal in mind. Although events can take you to unexpected places, and although Australia is of course a fantastically wonderful country to explore...my path is guided not by place, nor by wanderlust, and perhaps not even by my artwork, but by a much greater pull of the heart.

It's time to take to the wing once more.

And so this brings me to October, and as I turn my eyes to the autumnal sky, the soft lonely cry can be heard. 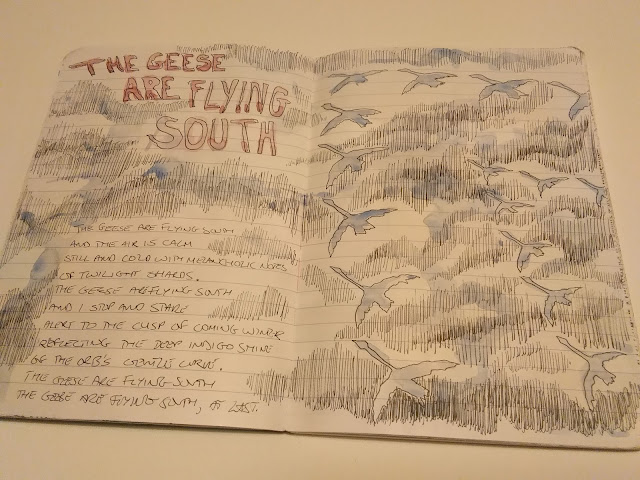 The geese are flying south.
And the air is calm.
Still and cold, with melancholic notes
Of twilight shards.

The geese are flying south
And I stop and stare,
Alert to the cusp of coming winter;
Reflecting the deep indigo shine
Of the orb's gentle curve.


Posted by David Dalzell - The Wandering Artist at 21:00 2 comments: